Solanezumab: Is the first disease-modifying treatment for Alzheimer’s on the horizon?

This is a cross-post with Alzheimer’s Research UK.

We’re hearing in the news that a new treatment designed to slow Alzheimer’s has shown benefit in one of the final stages of testing in people. The drug is called solanezumab and the results were discussed today at the Alzheimer’s Association International Conference 2015 in Washington.

We were present at the conference and sitting in a room of expectant scientists when the announcement was made. One of the busiest sessions of the conference, this was an eagerly-anticipated trial result for Alzheimer’s researchers. But the same drug made headlines across the world in 2012 for failing. So what’s going on? 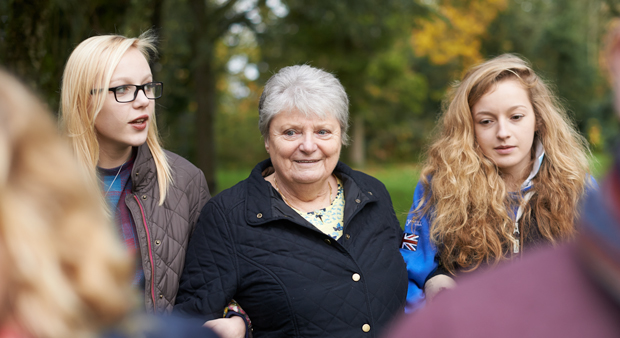 The back-story for solanezumab is more complex than trying to work out how to pronounce its name. But what seemed a black cloud for the world of Alzheimer’s research three years ago seems to have a silver lining that, in light of today’s findings, could be promising indeed.

The drug is designed to target the build-up of amyloid into plaques in the brain in Alzheimer’s – a hallmark of the disease. Scientists have been working for many years to understand how and why amyloid builds up and whether blocking this process would be a route to stopping the disease.

We all have amyloid – it’s a useful protein, but it’s made through a complex process of protein chopping and pruning, which is delicately poised to produce just the right amount of the right kind of amyloid to do the job. In Alzheimer’s, this equilibrium gets thrown off and a sticky form of amyloid starts to accumulate in between nerve cells. It clumps together to form amyloid plaques, which are thought to disrupt cell communication and trigger other damaging processes.

There is plenty of healthy scientific discussion about whether this process is the real driving force of Alzheimer’s, but one thing is for certain – it’s one of the earliest changes in the disease. Researchers have shown the build-up of amyloid can start to happen 10-15 years before symptoms show. The best way to see whether a process is key to disease? Develop a drug to block it and see if it makes people better.

Of course, this is much easier said than done, but solanezumab is one of the drugs designed to do just this. Engineered to mop up normal amyloid protein before it has the chance to become sticky, the drug was shown to be safe in early clinical trials in people. Once it entered two phase III trials in 2009, being given to 2,052 people with mild to moderate Alzheimer’s for 80 weeks, the stakes got  higher. Phase III trials represent the final stage of clinical testing for new drugs and success here leads the way to marketing approval and recommendation for use in patients.

When the results of these two trials were announced three years later, hearts around the world were heavy. The drug didn’t show benefits on memory and thinking when the researchers looked across all patients. Because it didn’t meet these pre-defined endpoints, it was classed as having ‘failed’.

But closer scrutiny of the data showed a silver lining. Solanezumab did seem to show modest improvements on memory and thinking in people with mild Alzheimer’s, but not those with more advanced disease. To many researchers, this made sense. Amyloid build-up happens early, so you’ll need to get in early to see a bigger effect.

While the benefits weren’t enormous, they were large enough to convince the drug-makers Eli Lilly to set up another phase III clinical trial only in people with mild Alzheimer’s disease.

In the meantime, they did an extension study following on from the original phase III trials where all participants who had mild Alzheimer’s were put onto the drug. They expected that those who had been on solanezumab for the whole three and a half years would be performing better than those patients only moved onto the drug from placebo at the start of the extension study. This would suggest that the drug was having a true effect in slowing the disease. Today, the results are in.

The improvements seen for those taking solanezumab for the whole three and a half year period were sustained compared to those who were moved onto the drug later. The benefits of the drug on memory, thinking and function were small, but this group of people had early stage Alzheimer’s and if the drug was able to slow the disease, researchers would expect the observed benefits to increase over time. Without that evidence though, we don’t know how big those benefits could be for people with mild Alzheimer’s on solanezumab.

However, this is an important and promising chapter in the story of solanezumab. If these results hold true when the current phase III reports its findings late next year, and show that those with mild Alzheimer’s decline more slowly on the drug than on placebo, this could be evidence of the first disease-modifying treatment for Alzheimer’s. While this would be very positive, we need to be cautious. The most important outcome of that trial will be to see whether the effect is large enough to make a real, measurable improvement to someone’s life. With so many people waiting for effective new treatments, there will be many eyes watching and they’ll need a larger conference hall.