Why do some people get dementia and not others?

This is a cross-post with Alzheimer’s Research UK.

As the number of people living with dementia grows, so does public awareness of the condition. According to a YouGov poll, dementia is now the most feared condition in over 55s in the UK. But why do some people develop the diseases that causes dementia, while others are spared? Yesterday, researchers at the Alzheimer’s Association International Conference shared diverse findings about dementia risk – from genetics to lifestyle.

While age remains the single biggest risk factor for dementia, many genetic and lifestyle factors have also been linked to the condition. We’ll explore just a handful of those discussed at the conference today.

This is a question we are often asked by family members caring for a parent or grandparent. In rare cases, someone might inherit a gene from one of their parents that doesn’t work properly. Having one of these rare mutations makes someone almost certain to develop early-onset Alzheimer’s, or frontotemporal dementia, during their lifetime. However much more commonly, people can carry risk genes. There are now over 20 risk genes linked to an altered risk of developing typical late-onset Alzheimer’s, but having one or more of these risk genes does not mean that developing the disease is a certainty.

The most well-known Alzheimer’s risk gene is called APOE and makes a protein important for keeping our brain cells healthy. There are three different versions of this gene in the population – APOE2, APOE3 and APOE4 – and we inherit two copies, one from each parent.

People who have one copy of APOE4 (about 25% of the population) are around three times more likely to be affected by Alzheimer’s and develop the disease at a younger age. A small number of people (about 2% of the population) inherit two copies of APOE4 – one from each parent. They may be more than eight times more likely to develop Alzheimer’s. However, due to the number of other factors that can influence Alzheimer’s risk, they still may never develop the disease.

Researchers yesterday were sharing clues to how APOE4 alters brain biology. MRI brain scan studies suggested these genetic factors may also interact with lifestyle factors. One team reported that the protective effects of greater education on grey matter – the parts of the brain containing nerve cell hubs – may be less strong in people who carry the risky APOE4 gene. This could be one reason why people with this version of the gene are more vulnerable to the disease. While the findings need repeating in a larger group of people, they provide a fascinating insight into how genetics could interact with environmental factors to impact Alzheimer’s risk.

We also heard from a team at University College London, carrying out one of the largest studies to date in people with a rare visual form of Alzheimer’s called posterior cortical atrophy (PCA). By pooling DNA samples from patients across the world, they’ve linked new genes to a higher risk of PCA, suggesting a potential reason why some people might be more vulnerable to this particular form of the disease than others.

Use it or lose it

Cognitive reserve describes the brain’s ability to adapt to damage by re-routing networks and developing compensatory strategies to keep going in the face of a problem. Researchers have suggested that people who have more education or do more mentally stimulating activities throughout life build up a higher cognitive reserve, allowing their brain to resist damage caused by disease like Alzheimer’s for longer.

One of yesterday’s talks supported this idea by discussing how people with longer years in education were less likely to develop dementia after a stroke. Another group from Sweden used childhood school performance as an indicator of cognitive reserve, revealing that people with lower school grades in early life were at a greater risk of developing dementia later in life. Despite these measurements coming from 50 years ago, the study suggested that childhood mental ability could predict a person’s risk of dementia better than more common indicators of cognitive reserve such as years in education or whether they’ve held complex jobs later in life.

Sleep can have an important effect on our brains and memories. We’ve heard the latest research into this area of dementia research, including how a lack of deep sleep can interfere with how we store memories and how conditions like sleep apnoea could interrupt oxygen supply to the brain. 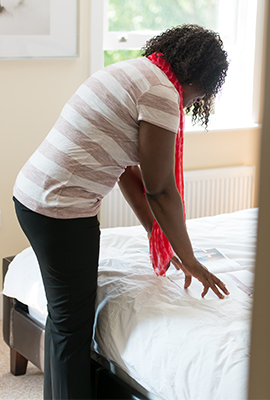 One researcher showed that more of the hallmark Alzheimer’s protein, amyloid, builds up in the brain in sleep-deprived rats compared to their more well-rested counterparts. The presenter explained that lack of sleep might increase Alzheimer’s brain changes, but that these changes could also contribute to a lack of sleep, producing a vicious cycle that causes the disease to worsen.

Scientists think that an important function of sleep is to clear away waste material from the brain, as well as proteins like amyloid. Another study in rodents showed that the position in which mice slept could influence how well they cleared waste from their brains. Researchers found the clearance process worked better when mice slept on their sides rather than their front or back. While studies like these in mice are an important step to finding out more about the biology of dementia in people, we don’t yet know how these findings apply to human disease.

Type 2 diabetes is a disease where the body doesn’t produce enough insulin or cells no longer respond to the hormone. As insulin acts as a trigger for cells to take up glucose from the bloodstream, people with type 2 diabetes have increased blood sugar, leading to a range of problems including visual disturbances, frequent urination and fatigue.

We know that type 2 diabetes is a risk factor for dementia, particularly vascular dementia. There are different theories to explain the link between the two conditions, but researchers are yet to reach a consensus. Yesterday, scientists shared their findings suggesting that diet could drive the interplay between diabetes and dementia.

A high glycaemic diet – composed of carbohydrates that are broken down quickly and cause a rapid rise in blood sugar – can lead to insulin resistance. In one study of nearly 500 middle aged people, researchers found that those with a high glycaemic diet had faster rates of memory decline over two years. They also found that a high glycaemic diet was associated with brain shrinkage on an MRI scan, indicating damage in the brain. From this particular study, it is not possible to conclude that diet is driving these changes in the brain, but it does raise the importance of exploring the link between diet, diabetes and dementia. Not only could this reveal tools for preventing memory decline in these at-risk groups, but there could be insights about diet and brain health for the general population.